This trip report covers Emirates Airlines flight EK517 from New Delhi, India (DEL) to Dubai, UAE (DXB). Flight EK517 has scheduled timings of departure at 4:15 pm from DEL and a 6:35 pm arrival at DXB. This is the most premium aircraft operating on this route, the other ones being from Indian carriers like IndiGo Airlines, SpiceJet, state carrier Air India, Air India Express and recently, Vistara.

The flight leaves from Indira Gandhi International Airport (IGIA) Terminal 3. Upon reaching the entrance, you’re asked to furnish your ticket and an ID proof, a standard practice at all airports in India. The next step is the baggage drop area where Emirates has two rows of counters. Both rows were dedicated to this flight at the time when we checked-in since it is an off-peak time for travelers. My travel companion and I had checked-in online and had to just drop baggage, which was very fast. Thereafter, we proceeded to the immigration and security check where the process was equally smooth. We were through with this whole process in under one hour.

Next thing is the duty-free and shopping area of IGIA Terminal 3 which is very good and at par with most international airports. At this point, there is a food court and, also, dedicated lounges and hotels for different kinds of travelers. We headed to the lounge to grab a quick lunch. The Plaza Premium Lounge in Terminal 3 has good food options as well as a well equipped waiting area. 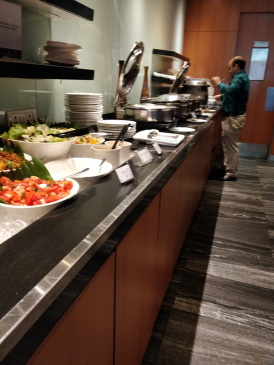 The departure was from Gate 3 with the area enclosed in glass enclosures and a baggage security check happening just before entering this area. Again, a simple process. 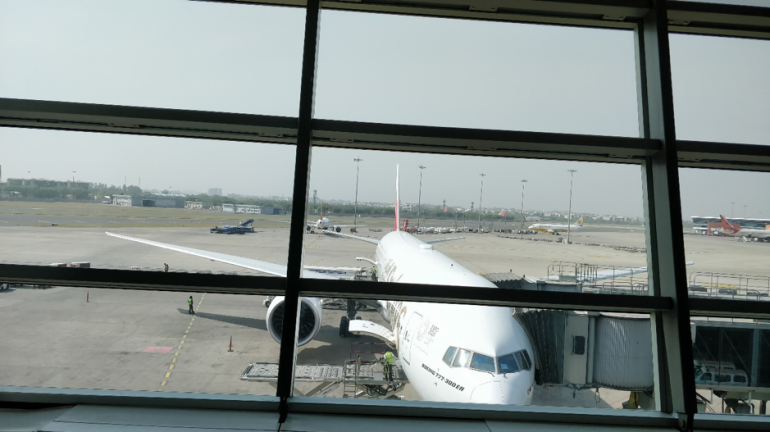 The boarding was very organized. The whole flight had been divided into zones and boarding was being done in order of the zones to make it smooth for everybody and minimize aisles getting blocked.
Our seats were on the wings. We had a good view of the wing as well as the area in front of the wing from the seats. Boarding completed swiftly and within a few minutes, we were taxiing. The take-off was very smooth, possibly the smoothest I’ve ever experienced.
The aircraft on that day had a crew from 11 nationalities on the flight. Emirates’ in-flight service has always been top-class, and this flight was no exception.
Here are a couple of clicks of the cabin. The Economy cabin has a 3-4-3 configuration while the business class has a 2-3-2 configuration.

Leg space was ample, even for tall people. I’m relatively petite and had a lot of space ahead of me. Food was scrumptious in both vegetarian and non-vegetarian options. Could not click any food pictures though, unfortunately.

The lavatories were clean and good-sized compared to smaller aircraft. 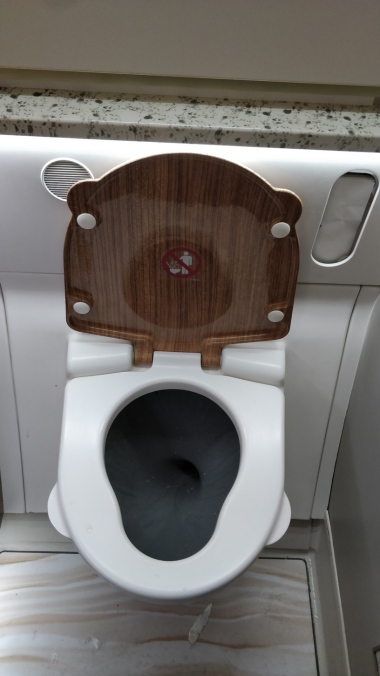 Emirates’ in-flight entertainment, ice, short for Information Communication Entertainment, is among the best in class. On every flight, you’re left with so much more that you wanted to explore but the flight feels short to explore the mammoth content library.

My favorite part was the cameras which give two views – the cockpit and the tail below the aircraft.
The flight ended with a smooth approach and touchdown.

Emirates arrival lounge is pretty glitzy, as you can see from the picture below!

To summarize, the flight was very pleasant, the weather was nice, amazing views from the cameras, good food, and in-flight entertainment. One special thing was the extremely courteous and helpful in-flight staff who made the flight an absolute delight.

View all posts by Saurabh